Virginia City was a mining camp in America’s Wild West. During the American Civil War, it was a dangerous place, full of gamblers, desperados, pistol-packing widows and – worst of all – newspaper reporters. When twelve year-old P.K. Pinkerton arrives there homeless, penniless and hunted in 1862, things don’t look good. But P.K. soon finds allies in a young reporter named Mark Twain, a gambler called Poker Face Jace and Ping the photographer’s apprentice. With an inscrutable face, an inquiring mind and a penchant for disguises, P.K. sets up shop a detective. Full of real historical characters and events, the four P.K. Pinkerton Mysteries are unlike anything you’ve read before. Yee-haw! Ages 9+ 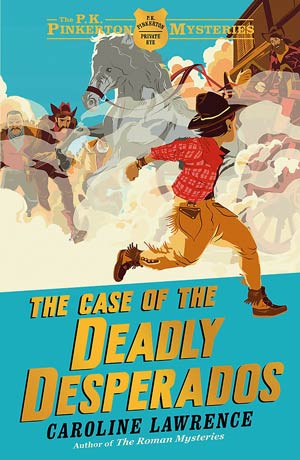 The Case of the Deadly Desperados
Book 1

Virginia City in 1862 is a dangerous place: a mining town full of gamblers, hurdy girls and gunmen – all of them on the make! When twelve year-old P.K. Pinkerton arrives, homeless, penniless and hunted, things don’t look good. But P.K. soon finds allies in Sam Clemens, a newspaper reporter, Poker Face Jace, a gambler who can tell when someone is bluffing, and Ping, a Chinese photographer’s apprentice. With the help of these friends P.K. takes on the tricksters and desperados and tries to become a detective. 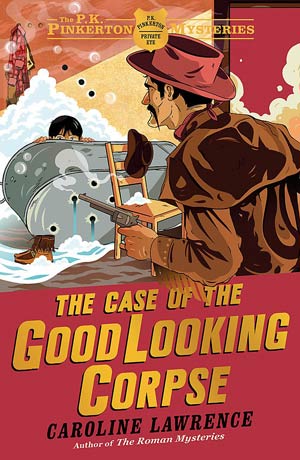 The Case of the Good-Looking Corpse
Book 2

In Virginia City, Nevada, the death of sadistic desperado Whittlin Walt has created an opening for ‘Chief of the Comstock Desperados’ and several young gunfighters are battling it out. Against this backdrop of gunmen, gamblers and cowboys, 12-year-old P.K. Pinkerton, Private Eye, is having trouble drumming up business. Then a servant girl named Martha asks for help: she witnessed a murder and the killer is after her. Can P.K. solve the case and help Martha before the killer finds her? (Nominated for a 2014 EDGAR award.) 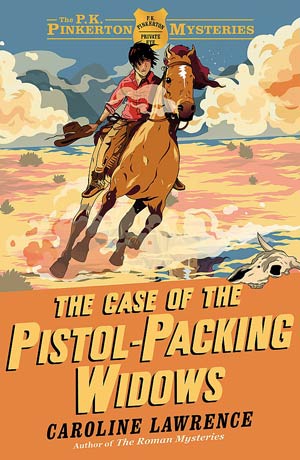 The Case of the Pistol-packing Widows
Book 3

From the million-copy-selling author of The Roman Mysteries comes the third whip-cracking adventure in this award-winning series. P.K. is abducted and commanded to travel to Carson City, don a disguise and shadow her friend and mentor, Poker Face Jace. But Jace isn’t easy to fool, P.K.’s widow woman disguise is horribly uncomfortable and, as if that’s not bad enough, it seems somebody wants to kill her! Can P.K. survive amid the gun-slingers, gamblers and desperados of Carson City? 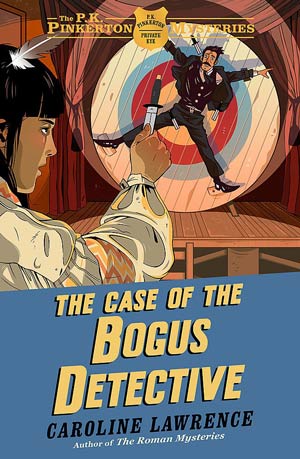 The Case of the Bogus Detective
Book 4

The final whip-cracking adventure in the P.K. Pinkerton series from bestselling Roman Mysteries author Caroline Lawrence. When P.K’s father appears in Virginia City, her life turns upside down. Suddenly she’s having to learn how to be a ‘girly-girl’. In a cunning plot to outwit highwaymen after silver, P.K. travels to San Francisco, but it seems the thieves are one step ahead! A gripping stagecoach ride of a tale packed with Wild West authenticity and atmosphere. With added Mark Twain goodness.

Website by Helicon Designs
To give you the best possible experience, this site uses cookies and by continuing to use the site you agree that we can save them on your device. Cookies are small text files which are placed on your computer and which remember your preferences/some details of your visit.OK